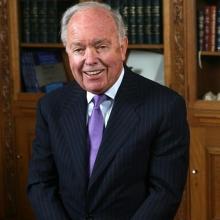 Mayor John Suthers presented the Spirit of the Springs Lifetime Achievement Award to William J. (Bill) Hybl after his State of the City address on Sept. 17.

Bill Hybl was raised in Pueblo and came to Colorado Springs to attend Colorado College. After graduating from The University of Colorado Law School, he served two years in the U.S. Army and worked as the deputy and assistant district attorney in Colorado Springs. He was elected to the Colorado House of Representatives in 1972, but left a few months later to serve as Vice President of The Broadmoor Hotel and Executive Director of the El Pomar Foundation. Hybl was Chairman and CEO of El Pomar Foundation for 30 years and continues to serve as Executive Chairman.

“As the leader of El Pomar Foundation, Bill Hybl has had a tremendous positive impact on the quality of life in Colorado Springs, Olympic City USA,” said Mayor John Suthers. “He is a visionary whose service to our community has been exceptional.”

Bill Hybl has received many awards, served on numerous community boards and held international positions, including two terms as president of the United State Olympic Committee. He was recently recognized with the naming of one of the City for Champions projects, The William J. Hybl Sports Medicine and Performance Center. He and his wife, Kathleen, have two sons and six grandchildren.

It is my pleasure to add another name to an impressive list of past recipients of the Spirit of the Springs, Lifetime Achievement Award. That list includes Nancy Lewis, Harry Hoth, George Fellows, Mary Ellen McNally, Chuck Murphy and Kathy Loo.

This year’s recipient will fit right in. He’s a community visionary with a long list of outstanding accomplishments.

Many of you know Bill Hybl as the leader of the El Pomar Foundation, which has made an impact on our community that is difficult to put into words. He served as the leader in the foundation for 46 years, and is now the Executive Chairman of El Pomar’s Board of Trustees.

Regardless of the position he holds or the project he’s working on, Bill is always focused on how to make Colorado Springs and the entire state of Colorado the best place to live, work and play.

Just a couple of weeks ago marked the opening of The William J. Hybl Sports Medicine and Performance Center, one of the City for Champions projects. It’s an incredible asset for patients and students, here at home and from across the country. And it’s just one example of the tremendous impacts he’s made.

While we would need a lot of time to cover Bill’s entire impressive resume, we want to highlight his contributions with a video tribute. Please turn your attention to the screens.

I want to recognize Bill’s wife Kathleen, their two sons and daughter-in-laws, Kyle & Sally (Grandson Aiden is filling in for his mom), BJ & Crystal. We’re happy you can all be here today.

It’s my pleasure to welcome Bill Hybl to the stage and present him with the 2020 Spirit of the Springs, Lifetime Achievement Award.